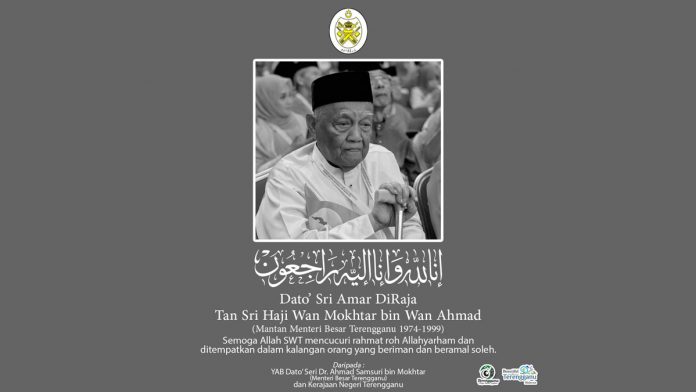 “Allahyarham was the longest-serving Terengganu Menteri Besar from 1974 to 1999. Endless thanks for his contributions and services to the State and the people of Terengganu.

“On behalf of the State Government, our heartfelt condolences go out to Allahyarham’s family. Let us pray he will be placed among the pious,” he said.

Wan Mokhtar, 88, died at 6.20 am at the Prince Court Medical Centre, Kuala Lumpur due to heart complications.

Meanwhile, Terengganu Umno chairman Datuk Seri Ahmad Said, who considers Wan Mokhtar as his own father and a mentor said there were countless of Wan Mokhtar’s contributions that the people of Terengganu should know of throughout his 25-year long tenure as Menteri Besar.

Ahmad Said, who is also former Terengganu Menteri Besar, said Wan Ahmad’s main focus while leading the state administration was on education and welfare for the poor and rural communities.

“I knew him right from my primary days as Allahyarham used to drop by to visit my father and also homes of other villagers… this has always been his practice and during his visits, he would advise the children on the importance of education.

“He also ensured children from the villages who excelled in their studies were given financial assistance to pursue their higher education… He did not want anyone left behind due to poverty,” Ahmad told Bernama when contacted here today.

The Kijal assemblyman said among Wan Mokhtar’s contributions was to set up the Terengganu Islamic Foundation, Terengganu Family Development Foundation and the introduction of cash rewards for those who excelled in the Ujian Pencapaian Sekolah Rendah (UPSR) and Penilaian Menengah Rendah (PMR) examinations.

“I extended this reward initiative to cover Sijil Pelajaran Malaysia (SPM) and Sijil Tinggi Persekolahan Malaysia (STPM). This is what is special about students in Terengganu, they are constantly assisted financially when it comes to education, and this policy has continued until today.. this was Allahyarham’s idea to begin with,” he said.

Ahmad, who currently is in Tawau, Sabah said Terengganu UMNO will be holding tahlil prayers for Wan Mokhtar soon.

He described Wan Mokhtar as a patient leader who incorporated strong religious values in his administration.