KUALA LUMPUR – The process of appointing the prime minister and the subsequent formation of the government require clear proof especially on the shift in support of the members of Dewan Rakyat, according to constitutional experts.

They said even though the law did not state in detail the method to determine the position of the prime minister who has lost the majority or the party claiming majority support, the shift in support is usually proven with the sworn statements (SD) of the members of Parliament (MPs).

Therefore, they described the advice of the Yang di-Pertuan Agong Al-Sultan Abdullah Ri’ayatuddin Al-Mustafa Billah Shah that PKR president Datuk Seri Anwar Ibrahim accepts and respects the legal process as enshrined in the Federal Constitution, showed the process has not been met.

Universiti Teknologi Malaysia (UTM) constitutional expert, Dr Muhammad Fathi Yusof said the statement of Istana Negara that Anwar did not submit a list of members of Parliament supporting him so far gives the impression that Prime Minister Tan Sri Muhyiddin Yassin has not lost the majority.

“The process of forming the government or appointing the prime minister need to go through a clear process. Firstly, one has to give the impression that the Prime Minister does not have the support of members of Dewan Rakyat. Secondly, the party claiming support should show a clear name list on the change in Parliamentary support. The remark from the palace showed the matter did not take place, it was as if what happened was just a political play.

“It is not clearly stated in the law on the way or method a prime minister loses his majority support or the party claiming support. But through conventions, the matter could be through producing the SD of MPs or a name list at least,” he said when contacted by Bernama on the political crisis besetting the nation following Anwar’s move as opposition leader in having an audience with the King to form a government after claiming to have secured the support of more than 120 members of Parliament.

Anwar however merely submitted the total number of MPs who allegedly gave their support to him to form the government during the audience with the Yang di-Pertuan Agong at Istana negara here today.

Nonetheless, Comptroller of Royal Family and Household, Datuk Ahmad Fadil Shamsuddin in an Istana Negara statement said Anwar did not submit a name list of MPs supporting him to strengthen his claim.

In this regard, the Agong advised Anwar to accept and respect the legal process as enshrined in the Federal Constitution.

UiTM incumbent of the Institution of Malay Rulers Chair, Prof Dr Shamrahayu Abd Aziz said the remark of Istana Negara showed the opposition leader did not adhere to the right legal process.

“According to Article 43 (2) (a) of the Federal Constitution, the Yang di-Pertuan Agong has the power to appoint a member of Dewan Rakyat who in his judgement is likely to command the confidence of the majority of of the members of the house.

Dr Shamrahayu said according to Article 43 (4), a prime minister who loses the majority can meet the Agong and resign or the Agong dissolves the Parliament on the advice of the prime minister.

Earlier today, Anwar in a special media conference several hours after meeting the Yang di-Pertuan Agong announced that he has presented authentic documents of support from more than 120 members of Parliament to the King. 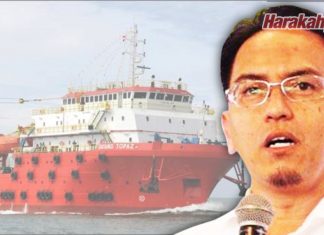