KUALA LUMPUR – The Pilgrims Fund Board (Tabung Haji (TH)) has taken a proactive approach in introducing the THiJARI mobile app to facilitate its 8.9 million depositors to perform various transactions at their fingertips.

Not only can they check and manage their account balance and transaction records, but THiJARI mobile app also allows depositors to transfer funds between TH accounts, update their profiles, as well as download and print their account statements.

More interestingly, the app that can be downloaded for free on Google Play or the App Store also makes it easier for depositors to check their hajj registration status, hajj offer confirmation status as well as locations and dates to attend TH Hajj Basic Course programmes.

The THiJARI app is an additional channel to TH existing counter and online services at over 10 thousand touch points nationwide.

TH Executive Director of Operations Mustakim Mohamad said as the name THiJARI (which sounds like ‘di jari’ in Malay language which means ‘at your fingertips’) suggests, all matters related to TH can now be done easily anywhere and anytime.

“TH has launched the THiJARI website in February and we are now launching the THiJARI app for use on smartphones or tablets for a faster, easy access, and safer service, as it also enable fingerprint or face recognition login, with the options to use either Malay or English language,” he told Bernama.

Mustakim said before using the app, depositors must first register as a user on the THiJARI website (www.thijari.com.my) by entering personal information such as identity card number, TH account number and telephone number registered with TH.

He said depositors were also required to create a username and password, and select their security icon or picture to access the app, just like the normal security features required for Internet banking.

However, he said certain transactions such those involving the closing of TH account, inheritance issue, registration of nominees, and hibah amanah could not be done using the THiJARI app as they need to de done at the counter for verification purposes.

Meanwhile, Mustakim said the current trend of IT literacy shows the use of smartphones was not only among the young people, but also the elderly.

Based on statistics, he said about 50 per cent of TH depositors are those aged between 18 to 55, and those under 18 years old made up about 30 percent.

“In other words, those aged below 55 made up 80 per cent of TH depositors. So, TH has to catch up with technology and stay relevant in its service delivery as it has been entrusted with the responsibility to look after and manage the savings of prospective hajj pilgrims,” he said.

Mustakim also expressed hope that the current 300,000 TH depositors who have been using THiJARI website will also use the mobile app in line with TH’s target to increase the usage to 500,000 depositors by the end of this year. 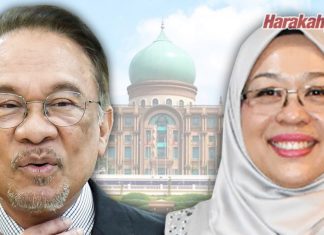