SEREMBAN – A new bill for the establishment of an ombudsman group is expected to be tabled in Parliament before the year-end, says National Governance, Integrity and Anti-Corruption Centre (GIACC) director-general, Tan Sri Abu Kassim Mohamed.

He said the bill, one of the key initiatives under the National Anti-Corruption Plan (NACP) 2019-2023, would be tabled at the next Parliament sitting, expected to be in November or December, and the draft was now at the Attorney-General’s Chambers, to be finalised.

“That’s why I fully recommend that the states should have their own ombudsmen, focusing on the local authorities,” he told reporters after witnessing the launching of the Negeri Sembilan Anti-Corruption Plan 2020-2024, at Wisma Negeri, here, Oct 30.

It was officiated by Menteri Besar Datuk Seri Aminuddin Harun with all the state executive councillors also present.

When launching the plan, Aminuddin said it was a follow-up to the NACP and Negeri Sembilan was the second to draw up an anti-corruption plan at the state level after Sabah which did it last year.

“Implementation of the Negeri Sembilan Anti-Corruption Plan over a period of five years is very significant in portraying the people’s aspiration of seeing a corruption-free state with its people making transparency, accountability and integrity a culture.

“Under these five focus areas are five strategies with 97 initiatives to be implemented by all the departments and agencies under the state government,” he said, adding that the plan would be a comprehensive source of reference in dealing with the issues of governance, integrity and corruption. 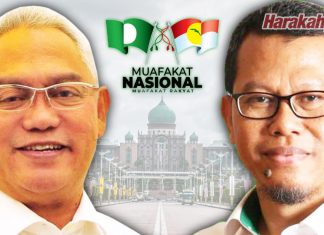