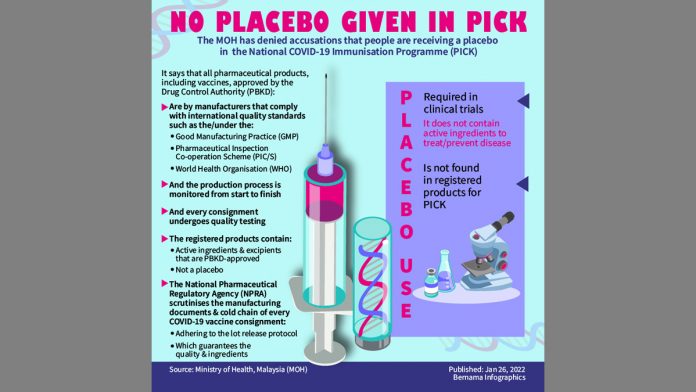 PUTRAJAYA – The Ministry of Health (MOH) has confirmed that no placebos are being used in the National COVID-19 Immunisation Programme (PICK).

In a statement today, MOH said claims made in a viral video that placebos were being used in PICK were not true.

It said placebos, which did not contain ‘active substances’ were used in clinical studies, where recipients would be randomly divided into two groups, and one receives the active substance, while the other gets a placebo.

“This situation is only used during clinical trials, and not for registered products used in PICK,” said the ministry.

It further stressed that all pharmaceutical products including vaccines approved by the Drug Control Authority (DCA) were produced through manufacturers that complied with international standards such as Good Manufacturing Practice (GMP), Pharmaceutical Inspection Co-operation Scheme (PIC/S) and World Health Organisation (WHO).

“Product quality monitoring is done throughout the manufacturing process, where quality control tests will be conducted on each batch before being marketed, and for registered products, it only contains active ingredients and excipients that have been certified by DCA for marketing, and not a placebo,” read the statement.

It added that the National Pharmaceutical Regulatory Agency (NPRA) also evaluated manufacturing documents and conducted cold-chain inspections for each batch of COVID-19 vaccine products through a strict Lot Release process, to ensure the content and quality of vaccine products were guaranteed.

The MOH also questioned how the party in the video had obtained a sample of COVID-19 vaccine and conducted a test on its contents, when in fact, COVID-19 vaccines were only allowed to be sold and supplied to the government and government-authorised parties.

As such, MOH said it viewed the claims made in the video as fake news and an attempt to confuse the public and tarnish the integrity of the ministry, adding that it would be lodging reports with the police and the Malaysian Communications and Multimedia Commission over the matter. 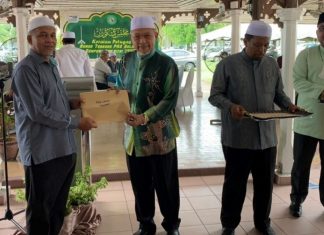 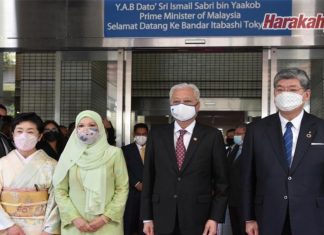 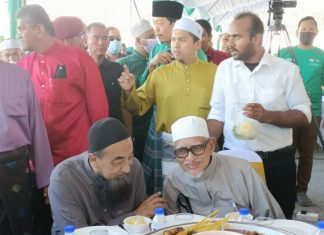