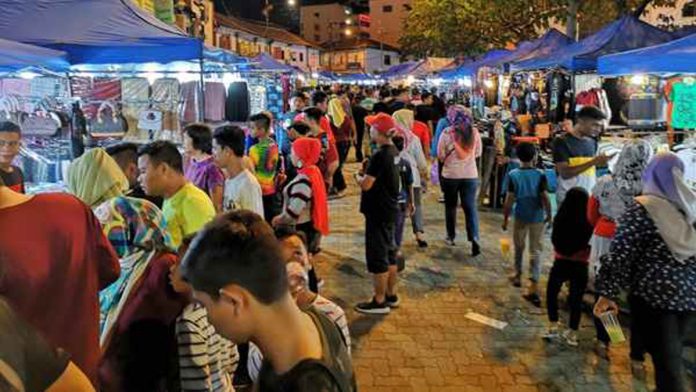 JOHOR BAHRU – About 267 traders at the Johor Bahru (JB) Bazaar or popularly known as ‘Bazar Karat’ are pleading for authority’s permission to continue doing business as usual to help them survive amidst COVID-19 uncertainties.

This was following the closure notice of the bazaar issued by the Johor Bahru City Council (MBJB) on Thursday which has forced traders to temporary halt their business operations effective today.

The closure order was issued as part of preventive and control measures to curb the spread of COVID-19.

Clothes trader, Wan Razimah Abdul Razak, 34, said she was shocked upon learning about the closure order as her business has just started to pick up again after being badly affected by the implementation of the Movement Control Order (MCO).

“It is difficult for me to look for capital. Now we have to close (the business) again after just being reopened recently, it saddens me. We have a family to provide for,” said Wan Razimah, who has been in the business for ten years.

She also hoped that there would be way for traders like her to continue doing business as it is their only source of income.

“We hope we can operate as usual as Bazar Karat has been operating with strict adherence to the Standard Operating Procedures (SOP) such as wearing masks and observing physical distancing.

Also affected by the announcement were another clothes trader Siti Aishah Ramli and her husband Hairul Nizam Roslam.

“The order came at a very short notice. It has really affected us because this is our only source of income. We have been doing business here since early days of the market until now.

“Previously, we were out of business for three months. Now just after starting back, we are being told to close again until further notice,” said Siti Aisyah, who has two children.

However, he said the short notice given has caused concern among traders and hawkers of losing their source of income during the closure period.

As such, he hoped that the state government would get down on the ground to get a clearer picture of the traders’ real situation and find an effective solution to help those affected.

Mohammad Salezan also planned to hold a meeting with Johor Housing and Local Government committee chairman Ayub Jamil to seek assistance of the state government to help ease the burden of the affected association members.

Besides JB Bazaar, among those involved in the temporarily closure are Borneo morning market at Taman Megah Ria, the Orang Asli seafood market at Taman Bayu Puteri and four farmer’s market as well as about 4,000 traders and hawkers.