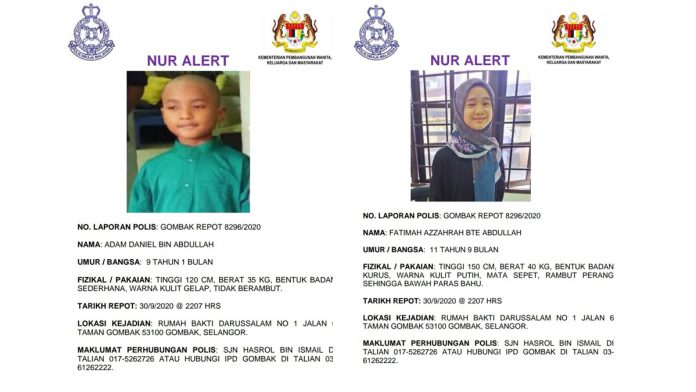 “The caretaker made a police report after noticing their disappearance,” said a police source.

A National Urgent Response (NUR) Alert for missing children was sent out by the police today with Fatimah described as slim and fair with slanted eyes, brown shoulder-length hair and about 1.5m in height, while Daniel is dark-skinned, shaven and about 1.2m in height.

Anyone who may have found them or has information for the police should contact Sgt Hasrol Ismail at 017-526 2726 or the Gombak district police headquarters at 03-6126 2222.

Gombak district police chief, ACP Arifai Tarawe, has confirmed police received the report and added that the children were supposed to attend Petaling Jaya Magistrate Court yesterday for a transfer of guardianship to a new children’s home.

“Before this, the sister had left a note about being unhappy that she would be moved and decided to leave.

“In the note, Fatimah said that she and her brother felt comfortable at their current home. She said that they needed the love that they have been getting here and don’t need luxuries,” said Arifai.